The Black Diamond Bar is a Perfect Gathering Place

Black Diamond takes its name from the abundant local coal deposits discovered in the late 1800’s by a government land surveyor, James McMillan, while he was digging an irrigation ditch. In 1899, Addison McPherson and J.J. Cooper opened a coal mine near the west bank of the Sheep River, just west of the town. The mine produced high-grade coal for home use which was hauled by horse to Okotoks along a rough road wagon-trail at a rate of about 650 tons per year. The mine site and crazily tilted coal seams in rocky outcrops are visible today from the 3km Friendship Trail to nearby Turner Valley. 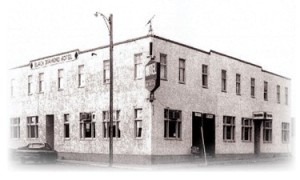 Ranchers settled in the area in the 1880’s. Pioneers, miners and ranchers continued moving into the area, in 1907 the town began to take on the appearance it bares today. Black Diamond had existed as a well defined settlement since the early 1900’s as a result of Addison McPherson’s coal mining business.

The oil and gas production in the area began in 1914, with the first well being built by Royalite Dingman. With the discovery of oil and gas in the area it boosted the population in 1929 to over 1000 residents, the decision was made to build a hotel to accommodate the newcomers. In the early winter of 1929, Louis Hanson dug the basement for the hotel with a combination of dynamite shovels, “slips”, and “fresnos”. A.A. Vassar then moved in to build the hotel for Judge Bill McGillvry. A two storey, wood frame building with rooms upstairs and a beer parlour and café downstairs, the hotel was managed by Shorty Des Rosiers. It is said that more wells were drilled in the beer parlour than were ever completed in the oilfields. When things got pretty slow in the thirty’s during the great depression, the hotel closed the doors at the end of October 1931 and reopened a year later. For many years Drs. Harry and Dave Lander had their office in the west corner of the hotel.

THE BIG BLACK DIAMOND FIRE OF APRIL 24TH 1949. The fire started at 5:30 am, Sunday morning and burned with a 60 mile an hour wind till noon. A call was sent out to the other Fire Departments in the area and the Okotoks fire truck responded, as well as 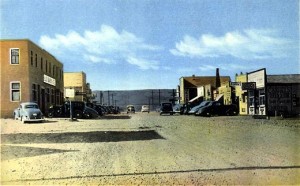 the one from the Royalite Oil Co. The fire trucks were kept supplied with water out of the river. The town, at this time did not have a water system, the supply came from wells, mostly pumped by hand. It was a long hard fight all morning, battling wind and flames, but the fire was finally brought under control at noon, after it had demolished a goodly portion of the south side of the main street. The hotel was one of the few buildings on main street that was not burnt in the fire of 1949.

THE BLACK DIAMOND HOTEL sits on the southwest corner of Highways 7 and 22. The hotel has undergone extensive renovations throughout the years, the most recent in 2000-2001. The hotel is a favorite watering hole, and renowned for its Saturday Jams. The hotel was and still is the largest building in the downtown, and is the centre of community social activity. The current owners have operated the hotel since 1982. 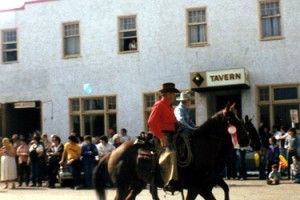 Points of History in Black Diamond: